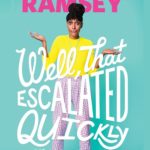 Wednesday host Lilada Gee speaks with actress, comedian and personality Franchesca Ramsey. She’s the host of the MTV web series Decoded, where she breaks down racism and cultural issues. She’s also a former contributor and writer for Comedy Central’s The Nightly Show with Larry Wilmore, and she currently co-hosts the podcast Last Name Basis with […]

Request a Kiosk Commentary
Submit an Event for the Kiosk